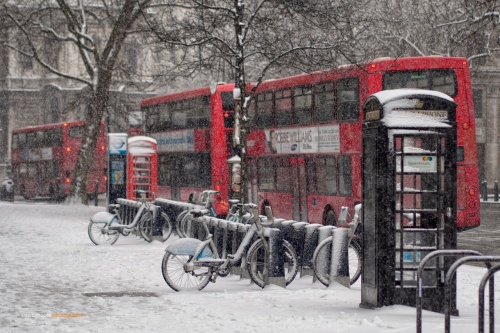 I got the shock of my life when I opened up my curtains this morning: SNOW! Lots of it! Frankie and Sansa didn’t even bat an eyelid when I showed the white stuff to them despite the fact that they’ve never seen snow since they were born but then I guess they’ve been prowling around the house at night jumping onto the windowsills to look out anyway. Ironically enough, despite the fact that there’s been no snow in London for months and months Ian has literally just gone to France to ski! lol Asides from venturing to and from work I shall be hibernating in my house this week as this snow lark isn’t impressing me much at all. I had to resort to wearing my snow boots to work today as the snow was so thick I could hardly get out of the driveway – hardly the most fashionable of attires, lol.

Still, it doesn’t appear to be as cold as it was when I went out on Friday night.  I went out to a party, missed the last train home so then I had a gruelling hour and a half journey home on the nightbuses from NW to SW London.

It was absolutely blitz! It was so cold that I ceased to have the ability to complain about it, when I finally got home I just snuggled as deeply into my bed as was possible without suffocating myself. Alas, it still took a few couple of hours to get my body at a reasonable temperature much less get warm. The cold was in me bones I tell ya!!